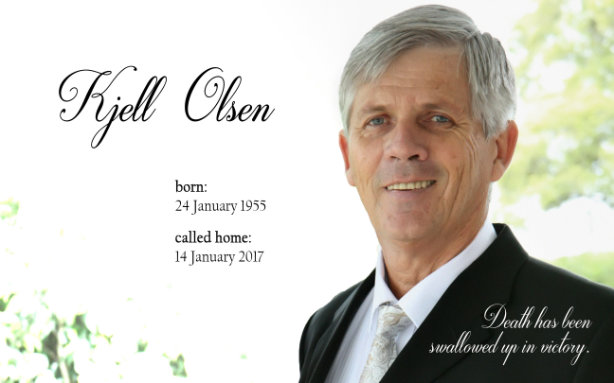 Matt 24:44
Therefore be ye also ready: for in such an hour as ye think not the Son of man cometh.

Every one of us should be ready to be taken by the Lord.

The famous evangelist DL Moody preached at the memorial service of someone who was with him in the ministry, Philip Bliss. Bliss was an American composer, conductor and writer of hymns and wrote songs like “Almost persuaded”, “Wonderful words of life”, “Let the lower lights be burning”, “Hallelujah what a Saviour” and the melody for “It is well with my soul”. Bliss and his wife died in a railroad accident. He was 38. His death was a great shock to the Christian world. Moody himself said what a disappointment it was for him. But he also said that from the time he heard that he was to take the memorial service there was just one thing running in his mind, “therefore be ye also ready”.

When Kjell heard of someone else who was very sick, he and his friends prayed for him every day that God would touch and heal him and at one point, Kjell said, “maybe one of us will go first”.

Moody continued and challenged the audience to be ready before the close of this service. Ask yourself the question, are you ready to meet God?
It was beyond Moody’s understanding how anyone could postpone coming to the Lord, when with a stroke one can be gone into eternity, maybe without hope!
He explained how God’s coming is often sudden and unexpected, as in the days of Noah, when people were eating and drinking, marrying and giving in marriage, until the Flood came and took them all away (Matt 24:38). He then quoted from Ez 33, that whoever hears the sound of the trumpet and does not take warning, if the sword comes and takes his soul away, his blood will be upon his own head. Because he heard the sound of the trumpet and did not take warning. But he who takes warning shall deliver his soul (Ezek 33:4-6).

Do you have ears to hear what God is saying? If you hear the warning and don’t take it seriously and do not act upon it, then your blood will be upon your own head. You won’t be able to blame anyone if you die unexpectedly and find yourself in an eternity without hope.

Moody continued, “I want to warn and plead with you today. I just felt that I had to cry this out: be ye also ready. Make ready before the close of this service. Just ask yourself this question, am I ready to meet God? If not, when will you be?”
Woe to you if you’re not ready. Death can come to you as unexpectedly as to our brother Kjell and where will you be?

They asked me if I could come to India but I was too weak and so I asked Kjell if he would be willing to go. He was delighted to go, like a child. I said to him that he would go with his friend Michael Muller from Germany, who was his great friend.

May not a single one of us be unprepared after today.

Moody ended with these words, “may God have compassion on everyone. May our eyes be opened to flee from the wrath to come. May we profit from this sad event. And may many be raised up in eternity to thank God for this meeting.”

Sermon audio in other languages:
French