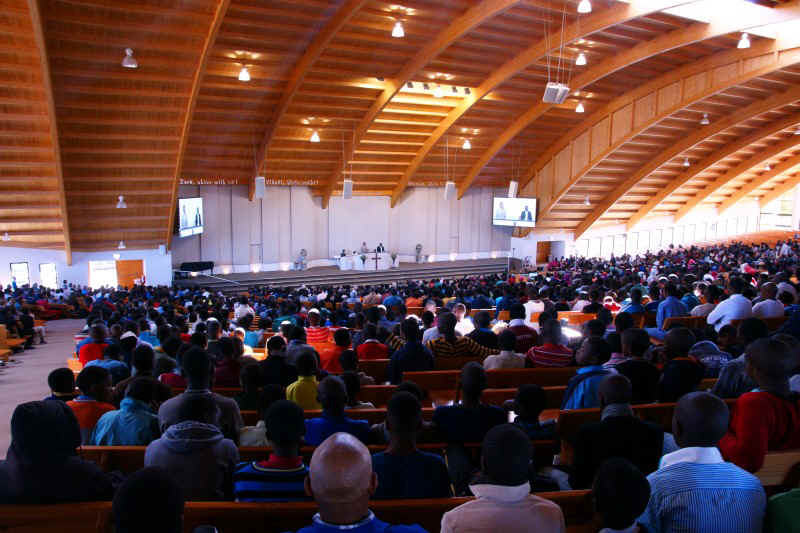 4 July 10am: Ntokozo Nhlabathi preached from 1Sam 7:7-12. When God’s people cried out to the Lord, asking Samuel to intecede for them, God intervened and gave them the victory. They didn’t need to fight for God put the Philistines to flight. You too can come to Christ and ask Him to give you His victory.

7pm: Rev Erlo Stegen’s last service. Sexual immorality destroys people and even empires are brought down low because of it. Only by escaping into the Ark, our Lord Jesus Christ, can we escape this destruction.

3pm: The afternoon service is dedicated to speaking to girls and boys separately on issues pertaining to their gender and age group.

3 July 10am: The introduction to the service was from 2 Pet 3:5-12 – with an appeal to the young people to make a clear-cut decision to run to the Lord for salvation. “Coming to Christ also means a decision to stop with sin.” Rev Erlo Stegen continued with this theme using different examples of those who came to Christ despite the deepest sin: the immoral woman who washed Jesus’ feet; the adulterous woman who Jesus forgave but to whom the Lord also said, “Go, and sin no more”. The whole message was one of invitation to come to the Ark who is the Lord Jesus Himself. We can hide in him. He grants justification which means that God sees a person as never having sinned before. (The transport of the thousands of children begins tonight. Please pray for their safe arrival and that God would keep them. In 41 years of Youth Conferences there has never been an injury through transport.)

7pm: Rev Erlo Stegen handed out Christian literature to those who had responded to the alter call a few days ago. Then he continued to preach from Gen 6. He stressed that only by obedience to God can we go forward. Disobedience results in death. Slides were shown of the consequences of the “Crokodil” drug from Russia which has found its way into South Africa.

2 July: Whole day sports. Teams from the many areas are playing sports on the DSS sports grounds. There are 44 soccer teams playing knockout games. Other teams are competing in netball and volleyball.

7PM: Tonight some young men from CYPSA (the Concerned Community) presented a delightful play, “Who can set me free?”, portraying the lives which they used to live and from which they had been set free – involving smoking, alcohol and drug abuse, sexual immorality and even being arrested and jailed. The message was clear that Jesus is the One Who can set us free completely and grant us new life and eternal joy. Afterwards one of them gave his testimony of being set free from the chains of the devil and hell.

1 July 10am: Rev Erlo Stegen read from Titus 2:11:”For the grace of God has appeared, bringing salvation for all people, training us to renounce ungodliness and worldly passions, and to live self-controlled, upright, and godly lives in the present age, waiting for our blessed hope, the appearing of the glory of our great God and Savior Jesus Christ, who gave himself for us to redeem us from all lawlessness and to purify for himself a people for his own possession who are zealous for good works.” We need to speak about God’s grace in these present times for we have looked at His grace in the ancient times of Noah. Rev Stegen spoke about the Lord’s grace when the revival began in 1966. (Read Revival Among the Zulus by E.H. Stegen (or right click here to download a version in Word format, and other languages here)

30 June 10am: Rev Erlo Stegen shared the story of how the Gospel penetrated Armenia about 290 AD. Through a faithful witness, Gregory, the Gospel influence the King and Armenia became the first Christian nation. Rev Stegen gave an invitation to the young people to come forward to make a decision for Christ, to receive grace from the Lord to become true witnesses for him, like Gregory and Noah. Thousands came forward. See higher resolution of the picture Rev Stegen brought back from Armenia recently, of Mountains of Ararat here.

7pm: Rev Erlo Stegen spoke from Genesis 6: 8-10. Noah found grace from the Lord. This grace gave him authority to influence his family – his sons and their wives all followed the Lord. Then, Rev Stegen spoke about what became of Noah’s generations. Through Shem God ordained that he would teach the true worship of God. Through Ham the Canaanites arose who would resist God’s people. Some racist whites claim that blacks came from the offspring of Ham but there is no Biblical record for this. Instead, Africa has been blessed by God. There are various instances of God’s blessing upon Africa. Joseph took Mary and the Christ Child to find refuge in Egypt. An African was chosen to help Jesus carry the Cross. Philip shared the Gospel with the Eunuch who then took the light to Ethiopia. However, if you do not embrace the Gospel you prove to be a Canaanite. If you have lived a life of a Canaanite till now you can come to Jesus for He became a “curse on the Cross” for you.

3pm: Kjell Olsen spoke from Phil 2:15 “shining like stars in this crooked generation”. He looked at 3 types of crookedness that young people are facing: evolution, the gay agenda and radical Islam. He used Powerpoints to illustrate.

29 June 10am: Alpheus Mdlalose preached about 2 groups of people found in the story of the blind man. The small group including the blind man found grace from our Lord Jesus. The second group was made up of onlookers – they were interested but untouched by grace.

7pm: Message by Heino Stegen. He preached about the prodigal son and used verses from Lk 15 and 16. God’s grace was revealed to the prodigal when he saw his sinfulness and his need of forgiveness.

28 June 11am: Morning service: Rev Erlo Stegen spoke from the theme verses Titus 2:11-13: “For the grace of God that brings salvation has appeared to all men, teaching us that having denied ungodliness and worldly lusts, we should live discreetly, righteously and godly, in this present world, looking for the blessed hope, and the appearance of the glory of our great God and Savior Jesus Christ, who gave Himself for us…”. The emphasis being on God’s grace being first revealed by name in Noah’s time “And Noah found grace in the eyes of the Lord”. He and his family received this grace in their generation which was full of evil very similar to today’s. Our Lord said that “as in the days of Noah so shall it be when the Son of man returns”. We can come to the God of Noah to be cleansed by the precious Blood of Jesus so that we are ready for the flood of fire which will come upon the world. Listen to the service here.

Tonight some young men from CYPSA (the Concerned Community) presented a delightful play, “Who can set me free?”, portraying the lives which they used to live and from which they had been set free – involving smoking, alcohol and drug abuse, sexual immorality and even being arrested and jailed. The message was clear that Jesus is the One Who can set us free completely and grant us new life and eternal joy.

Afterwards one of them gave his testimony of being set free from the chains of the devil and hell.