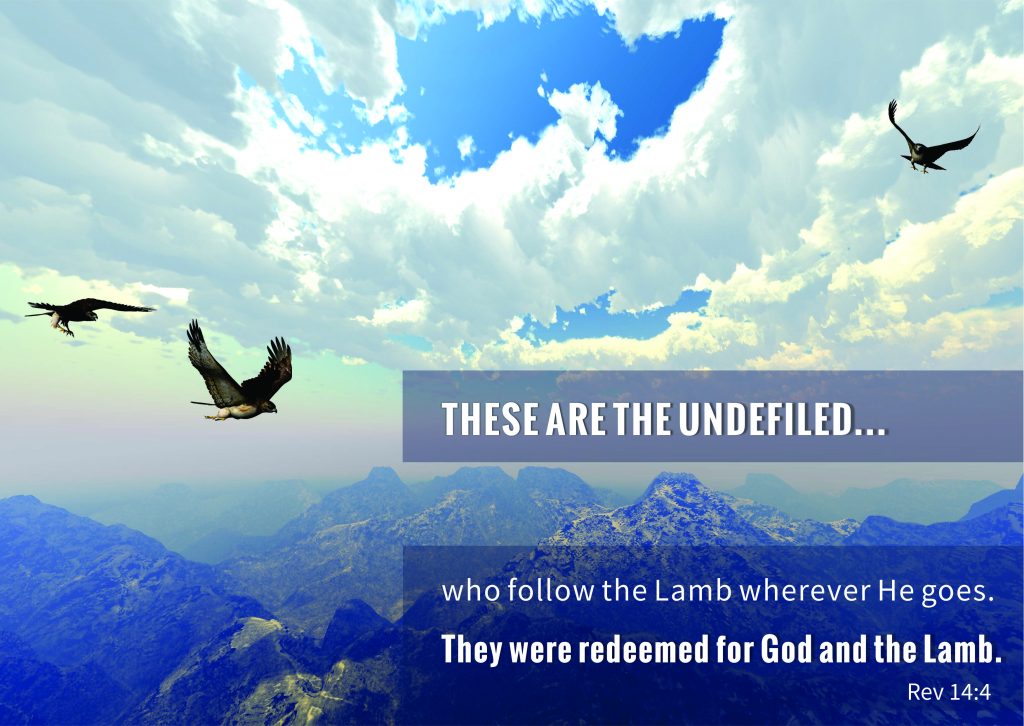 The bi-annual KwaSizabantu Youth Conference took place from 3 to 10 July 2017. The theme for the conference was taken from Revelations:

“These are the undefiled…who follow the Lamb wherever He goes. They were redeemed for God and the Lamb.” Rev 14:4

Although the conference officially started on 3 July, children began arriving on Saturday, 1 July. The transport arrangements are staggered to register and accommodate the large numbers.

Saturday, 1 July 19h00 Mr J Dube presented the evening service on The Sign of a Child of God. His scripture reference was 1 John 3:1. He expounded on the clear proof that will be evident when an individual takes a decision to become a child of God.

Monday, 3 July 10h00 Mr A Mdlalose presented the morning service. His text was taken from Matt 8:1-4 ‘Lord, if you will you can make me clean’. He challenged the young people to face the reality of their lives and tell Jesus about their sin of leprosy so that they can be healed during the conference.

Monday, 3 July 15h00 10 young people testified about how the Lord had worked in their lives and changed them since they had allowed Him to enter. They came from places such as Amatimatolo, Claremont, Kwa Mashu, Mbumbulu, Mgababa, Mntunzini, Pretoria and Welkom.

Tuesday, 4 July 10h00 Mr J Dube presented the morning service. The scripture reference from Isaiah 55:6,7 invites every single person to seek the Lord and after that to call on the Lord. He urged the young people to use the opportunities afforded at the conference to seek the Lord.

Tuesday, 4 July 15h00 16 young people testified about how the Lord had helped and changed them. They came from places such as Barberton, Ebizani, Emevini, Hammarsdale, Harding, Johannesburg, Maqhoko, Mount Frere, Pretoria, Russia and Umlazi.

Tuesday, 4 July 19h00 Rev E Stegen presented the evening service. His scripture reference was from Revelations 14:4. Rev Stegen explained where he had started – how he had grown up, how he met the Lord and how God called him to preach the gospel to the black people. He reminded the young people that to obtain the blessings of God, a person should start at the bottom. One must be prepared to be the servant of all, the lowest of all.

Wednesday, 5 July 10h00 Rev E Stegen presented the morning service. His scripture reference was from Revelations 14:4. Rev Stegen continued explaining how God had called him to preach to the black people. The more the gospel worked in his life the more it dealt with racial discrimination in his life. God tested and challenged him about how much he really loved the Lord through the questions Jesus asked his disciple, Peter, after he had denied Him.

Wednesday, 5 July 19h00 CYPSA (Concerned Young People of South Africa) Conclusion of panel discussion started in the afternoon session.
Power point presentation on CYPSA and the Dangers of Dagga and Alcohol Addiction was presented by Dr Elfrieda Fleischmann. (Over 14000 young people have come for help for drug and alcohol addiction at CYPSA. The organisation has reached over 1 million learners nationwide.)

Thursday, 6 July 19h00 Mr E Khwela presented the evening service. His text was from Romans 12:1,2. He challenged the young people to live lives that were holy because that is what God expects and He has called us to holiness through this word.

Friday, 7 July 10h00 DFL (Doctors for Life International) Power point presentation on the Effects of Dagga on the Body.
Testimony of a lesbian, Lisa.

Friday, 7 July 15h00 DFL (Doctors for Life International) Testimony of Durban prostitute, Precious.
Testimony of Clive, in which he highlighted the issue of suicide.

Friday, 7 July 19h00 Miss L Dube, Miss D Newlands, Rev E Stegen
Miss Dube gave a short history of the youth conferences since 1974. She emphasised the importance of keeping to the original gospel and goals of the work of KwaSizabantu. She encouraged the young people to take the opportunities afforded to them through this gospel. She thanked Rev Stegen for ‘keeping the ship of the work on course’.
Miss D Newlands presented a power point story based 1 Corinthians 6:19,20.
Rev Stegen concluded with 1 Peter 1:18. He warned the young people that they might begin by playing with sin but that sin would end up playing with them. Causing their hearts to grow as hard as cement through the power of sin.

Saturday, 8 July 10h00 Rev E Stegen presented the morning service. The scripture reference was from Revelations 14:13-16. He reminded the young people that the time of God’s judgement, His reaping, is coming. The stories he told illustrated the truth of this scripture when the time of reaping came to certain individuals who were unprepared.

Saturday, 8 July 15h00 14 young people testified about how the Lord had helped and changed them through this conference. Some of them asked questions. They came from places such as Gordon, Estcourt, Empangeni, Ezakheni, Mandeni, Mbizane, Umtata and Weenen.

Sunday, 9 July 10h00 Mr D Stegen presented the Sunday morning service. The scripture reference was from Ezekiel 18:30. He challenged the young people about their lives and that they need not live defiled lives anymore. He told the story of a 16-year-old troublesome boy who had attended services and youth conferences but he was not one of the undefiled and had not been redeemed by the Lamb. This boy was involved in a motorbike accident and went into a coma, however, during that time he was before the judgement throne of God where he was faced with his sins. He knew that he was lost to hell. There were demons whose task it was to torture him but he could not die. Suddenly he was saved out of hell to an indescribable place, where there is no lie and people are blameless.  He challenged the young people to accept the opportunity to be among the undefiled and to live a healthy spiritual life.

Sunday, 9 July 19h00 Mr M Ngubane presented the Sunday evening service. The scripture reference was from John 3;36. He reminded the young people that despite all they enjoy, they should remember that God will bring everyone to judgement. He encouraged the young people who had decided to follow the Lord during the week, to stand by their decision, be courageous and persevere in what they had decided.

Monday, 10 July 10h00 21 young people testified about how the Lord had helped and changed them through this conference. Some of them sang. They came from places such as Donnybrook, Greytown, Hlabisa, Jozini, Ladysmith and Pietermaritzburg.