A must to visit, if you are a searching soul (as was I).
A place where you will probably feel uncomfortable and want to criticize if you want to cling to pride and deliberate sin (as was I).
The missionaries (black and white) are also imperfect human beings… but shoo…what an example are they to me!
I have got to know and love many of these wonderful people who dedicate their lives to help others.
God has touched many people through this mission.
I am one of them.

My story:
I was a young medical student in 1980 at Stellenbosch university.
At school, I heard some of my friends testifying they had got converted and that they were now sure that their place in eternity was secured in heaven. My young heart yearned to be able to testify the same, but I couldn’t.

I strongly associated myself with Christianity, but had many questions. I recall how I drove on my motorbike from church to church in Cape Town area seeking somebody who would be able to help me find the way to spiritual salvation and inner peace. I met with things in some churches that I was not used to. Some claimed I had to fall backwards to be slain in the Spirit. Some baptised babies with the sprinkling of water and others baptised adults by emersion. Some spoke in tongues and others criticized it. Some believed that you should only sing Psalms and others indicated that I were bound if I did not dance while singing.

I struggled to understand the sermons of our pastor at our local church, but there was a respect for God to be observed in our church.  I read the tracts on salvation and prayed the prayers that were advised to me. I realised I had to fear God but I could not understand how I was supposed to fear God while He is described as a ‘God of love’.

I was lacking inner peace.

In my search, I attended many Christian movements, even took leadership positions in some of these groups. I led groups in song and Bible studies. I even tried to explain the way of salvation to others that were just as confused as I was.

On my first visit to the mission:

I thought these people were strange and that it was not possible to live the moral standards that were preached and respected there. There were a number of things that made a deep impression on me. As there was a shortage of accommodation, I, together with about 10 other young men, were accommodated in Uncle Erlo Stegen’s lounge (my mother would never have allowed that in her home!).  I noticed the love amongst the people, white and black, and so many different languages and cultures staying and working together. One Zulu co-worker was studying Russian because he wished to speak to their Russian visitors in their home language. Many whites spoke Zulu. I remember Uncle Erlo Stegen preaching in Zulu and the surprise on Zulu faces when they saw it was a white man speaking.

After 40 years I can still remember the scripture that a Zulu co-worker preached on. I was surprised that a Zulu could challenge me to live a Christian life of a higher moral standard than I was living.

The message was clear. Make peace with God and obey His voice.

When we left the mission on our way back to Cape Town, I remember telling my friend how wonderful it would be to stay permanently at this place. When I had said it, I realised I had just told a big lie (this was the last place at which I wanted to live). They preached against sin and I was not that bad after all. I was a medical student, had nice girl friends, could dance well and was respected in my Christian community.

I travelled the 1600km from Cape Town to Kranskop again to see if KSB was still preaching the same message. I thought it would/could not last. To my surprise nothing had changed.

Because the revival message was so different to that which I had grown up with, I then decided to work through the whole Bible myself to see what it said without other peoples’ interpretations.

I was invited by a very busy scheduled co-worker for breakfast. Some of his small children came giggling through the front door. Each came to greet me with a smile, looking me in the eye and made a small knee bow with an outstretched hand. They then disappeared while continuing their giggling. (It was refreshing to experience these small children’s respect towards me as well as their life joy). While we were talking, the telephone rang in the passage. His wife went to answer. When she came back, she stood at the door and waited till we had finished our sentence and then said: ‘My husband, there is a call for you.’ She spoke in such a respectful, loving way, that I immediately thought that I wanted such a relationship with my wife in my home one day if I would marry.

Another year passed by :

This time I hitch hiked the 1600 km. I remember sitting in my rondawel at KSB, studying the scriptures, listening to services on my tape recorder and visiting missionaries. I had so many questions.
I realised I would either have to stop calling myself a Christian or get converted.
I can clearly remember the night when I sat in a queue with many others to wait for a counsellor. I wished to surrender my life to Christ.
I can remember the peace in my heart when I left that counsellor’s office.
At the age of 21, I wanted to make a new beginning, but this time, with Christ in charge of my life.
I so wished to ask for forgiveness from those I had wronged. I contacted old girl friends, stopped listening to certain kinds of music and doing other things that I did not have peace about any more.

I remember writing a long letter to my dad, mentioning the incidences, one by one, where I had been disobedient and disrespectful towards him in the past 21 years. I asked him to please forgive me. The Lord had reminded me of each incidence. I put the letter in his briefcase. He told me that when he read the letter in his office the next morning, he left the building and walked over the parking area crying. Our relationship was restored. Our relationship has been a blessing to me for the past 40 years. I have learned not only to obey, respect and honour my parents, but also not to want to preach to them.

My mother thought I had gone crazy for suddenly I was doing all the things she used to urge me to.

I was so eager to share what I had found, that I bought a combi and drove people to visit the mission several times, first from Cape Town and later from Namibia.

The message of the Gospel became so simple and alive to me:
God’s sheep listen to His voice. God speaks with us through His Word and in our hearts. His children obey His voice. At the age of 21, I experienced a peace I had never known before.

I thought everybody would welcome and embrace what I had found. Unfortunately not. I was then accused, in certain Christian circles, of trying to live ‘sinless perfection’ , being  ‘holier than though’ , being ‘legalistic’. But I had found peace for my soul. The wall of sin between me and my Creator had been forgiven and broken down.

I am honoured to be a friend of Kwasizabantu mission and its people. They have helped me.
The revival message that  I was challenged with at KSB 40 yrs ago has brought peace to my soul. During these 40 years I have often visited them and taken others along. They still preach the same revival message I was confronted with 40 years ago. Nothing has changed – a message to make peace with God and to live knowing one is accountable to Him. Searching souls are still coming for help. People are still making peace with God and starting a new beginning.

It is still available for searching souls as I had been.

I have attended many of the bi-annual youth conferences of up to 5000 young people. These started in 1974. The children who want to attend, are fetched with buses and fed three meals a day. (It is something to observe the amounts of rice and other food that is prepared and all the people who help to prepare this).  Co-workers work late hours at night. All these people must get a place to sleep for up to 7 days. There are three services a day, councillors are needed to help seeking souls. I have often witnessed people quietly staying in their seats after a service with bowed heads. They did not want to leave the service before confessing their sin. God had spoken and convicted them of their sin. I have heard the testimonies of adults that, when they were children, these services were the time in their lives when they made a change for the good.

All this is done free of charge. Furthermore, I have never been asked to make any financial donation.

I have referred drug addicts to the mission for rehabilitation. It is wonderful to hear about ex drug dealers, rapists, human traffickers, thieves and murderers coming to Christ, their lives having being radically changed; young people who had been rejected by their families and communities, found love and help at Kwasizabantu mission; young people who could go back to their communities and parents, who got their healed children back. I have heard testimonies of ex-thieves knocking at someone’s door and confessing that they wanted to return the cell phone they had stolen, to its owner. It bothered them so much that they could not find peace before returning the stolen goods.

Unfortunately, there are also those that want to persist in their old ways and not come to Christ. Some of them refer their friends to the mission if they wish to be helped. Unfortunately some criticize the mission and its people and say they preach ‘sinless perfection’, ‘holier than though’  and of being ‘legalistic’. Needless to say, the opportunity has passed them by.

KSB is an example for South Africa’s racial conflicts.

In Christ, we can be one.

After all, as I understand my Bible, we will all have to spend eternity together, either in heaven or in hell. Why not choose God’s way. There is nothing to lose and everything to gain.

Thank you to all the people and corporate companies that support this beautiful work. You have helped to make it possible for searching souls such as mine to make a new start. 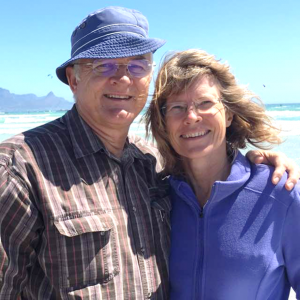