Home > Posts > Testimony > Thank You for Your… 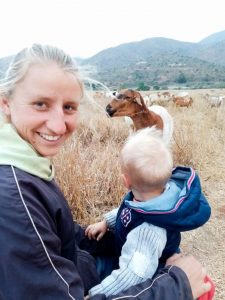 I spent my foundation phase years at the mission and in the Domino Servite School. When I finished grade five my family had to move back to Germany because God showed my parents that they should help my grandparents there. By 2015 my parents had moved back to South Africa, on to one of the branches of Kwasizabantu called Maqhogo.

After my apprenticeship I also came to Maqhogo because the Lord showed me this was the right way. I wasn’t forced to stay there it was God who told me to go there and help on the farm. There I saw how O. Erlo cares for great and small. As a child I hadn’t realised much but now I could see and realise how he would help out at funerals and when people were in need. And he himself would come to the farm and ask how it is going. God is working through him and the co-workers not only through preaching, this I realised in some situations. I remember one day when he came down to look at the farm he also looked at the sheep I was in charge of. That day he asked me a few times how I was, if I am doing fine. I always answered yes but in my heart I had a problem. At first I just thought why is he repeating his question so often? But then I realised it was the Lord speaking to me, telling me to make right with that problem I had in my heart.

Further I was touched to see the humbleness of the co-workers when preaching. Once one co-worker preached and there was the other translating, the next time the one who had translated preached and the one who had preached before was translating now.  It just touched me how the one person could have humanly speaking the honour of preaching and yet be humble enough to translate the next time.

The services encourage me anew to live a pure life, if I wouldn’t listen to them I would end up somewhere I wouldn’t like to be.

O. Erlo’s daughters are also a great example for me, how they are always kind and always have an ear to hear. When I would go to their house they would always ask if all is well and offer something to drink. I’m nobody special but they’d care about me anyway. I am very thankful that I could grow up at the mission and still be part of it. Thank you all my spiritual parents and brothers and sisters for your perseverance.