Home > Posts > Testimony > The Gospel I had Been Longing…

Early in my matric year, one of the school boys had an accident and we had to attend his funeral as the matric class. At the grave, I felt so convicted, knowing that if it had been me, I wouldn’t have been able to stand before the Lord. The Lord was showing me my heart as He saw it. All the unseen sins in my heart stood like giants before me. I didn’t know where to go and what to do to get help. For days, I lived in fear, fearing that I could die. Nobody but the Lord knew about the battle inside me.

A week later, I was invited by a cousin of mine to go to Kwasizabantu Mission, during a coming long weekend. I didn’t know anything about the mission, at that stage, but I felt a prompting to go. We arrived there very late at night. It was cold, wet and misty. I was amazed that we were welcomed with so much love, something hot to drink and nice sandwiches.

The next morning, Uncle Erlo was preaching from James 2:10 “For whoever shall keep the whole law, and yet offended in one point, he is guilty of all.” I knew the Lord was speaking straight to me. It was such a blessing to be able to go to a child of the Lord, to share my burden, to bring my sins to the light and to pray together. Deep down in my heart, I knew that this was the gospel I had been longing for.

Towards the end of that year, I felt God was calling me to Kwasizabantu. Those years there were most precious and I will never exchange them for anything. I experienced God continuing to work in my own life. I saw His work in the lives of many people and how He made them new. I stayed on the mission for over 19 years. During those years, I received so much love and care.

I had the privilege of sharing a room with some of the Zulu co-workers, for about nine years. I have learned so much from them through seeing their walk with the Lord. During those special years, we became like real family.

In 2002, I got married at Kwasizabantu. My husband lived in Smithfield and I moved to the Free State. We have received so much support and care from the mission through the years. The Lord blessed us with three boys. It brought us much joy and gratitude when they expressed the desire to go to Domino Servite, the school at the mission.

I can’t thank the Lord enough for Kwasizabantu, for Uncle Erlo, Aunty Thofozi, Aunty Eunice Ngcamu and all the other co-workers. Every time we visit and pass through the gate, it truly feels like home. 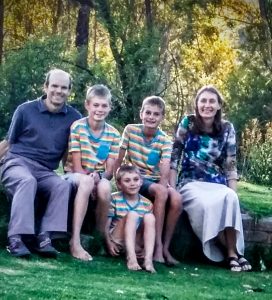